This month, Digital Forming exhibited at CES in Las Vegas for the first time. We were there to showcase our customization technology, both for our 3D printed services and for our softlines, non-3D Printed services. As CES is the biggest trade show in the world, we didn’t know what to expect, but we were definitely not disappointed in what we saw and who we met.

The team arrived early to set up the stand, and were amazed at the scale of the show. Luckily, everything went to plan and we were ready for the show on the Wednesday morning. It is incredible the amount of preparation that is required to make sure that everything is in place for the show.

We were fortunate to be joined on our stand by Brian Johnson, ex Intel Futurologist at Intel, and the rest of the 21st Century Robot team, who have used Digital Forming’s technology to create a customized robot to help engage children in the exploration and building of robots. It was great to have a “live” robot on the stand.

We were very busy on all four days of the show, and we met a lot of new potential customers as well as touching base with some existing ones.

Whilst we now cover both 3D printing and other non 3D printed customization, we were in the 3D printing section of the show. Most of the main players were there, although in terms of big new announcements in the 3D printing space there were few. 3D Printing is still definitely developing strongly with more and more platforms now available to make it easier for the consumer to interact with 3D designs. 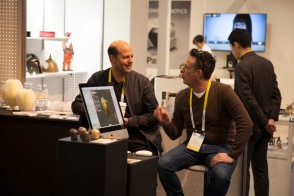 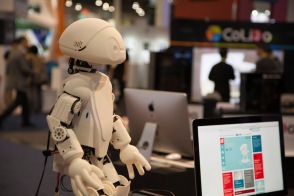 View all posts by digitalformingblog